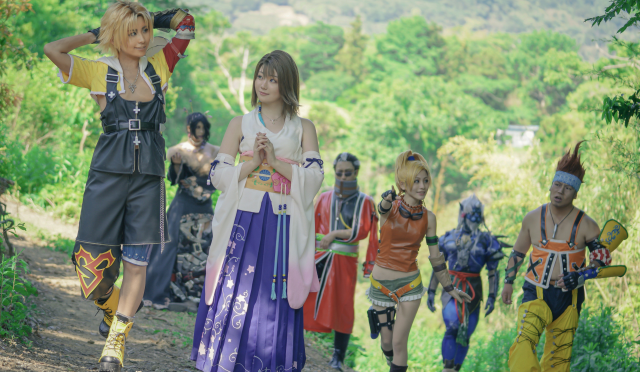 With the last days of summer here, many of us are looking back on the sunny season and the great memories we made. For example, Japanese cosplayer Masan (@ma_san_YP on Twitter) spent one afternoon hanging out with a half-dozen very good friends on a rocky coastline, hanging out, relaxing, and playing some Blitzball.

Oh, what, you and your friends don’t play Blitzball when you go to the beach, because you’re ordinary humans and not the cast of beloved role-playing video game Final Fantasy X? Well then you and Masan lead very different lives.

Masan personally is filling the role of unflappably cheerful Tidus (a.k.a. Tida in Japan) with friends and fellow cosplayers Shian as summoner Yuna, Zackey as Blitzball teammate Wakka, Hisyo as sultry sorceress Lulu, Murano=Murana as Yuna’s personal protector Kimahri-Ronso, GrandPapa as sunglass-sporting samurai Auron, and Akabane as gadgeteer gal Rikku. The group displays an astounding level of detail in their outfits, and even their hairstyling is spot-on.

▼ If you’ve played Final Fantasy X, it’s impossible to look at this photo and not immediately hear the opening notes of “To Zanarkand.”

Looking at the photos, Masan and company seem to have really gotten into the spirit of things, with their warm expressions conveying the bonds of friendship that Final Fantasy X’sadventurers form during their epic quest. That’s not all acting on the cosplayers part, however, as Masan’s tweeted message that accompanies the pictures is “Check out these awesome pictures I took with my awesome friends!! It was so much fun!!!”

There’s even a video of the group, which makes it look like a live-action version of Final Fantasy X could ne feasibly pulled off…

…provided, of course, Masan’s group is playing the parts.